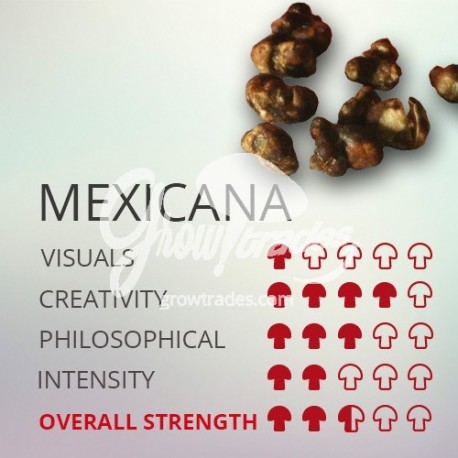 The psilocybe Mexicana is the mildest variety, excellent if you are new in the world of magic truffles. Psilocybe mexicana promise you a pleasant and euphoric experience with nice  feelings of happiness and satisfaction. Used in Mexican religious rituals, it was the first mushroom in which psilocybin was discovered. Psilocybe Mexicana originate in Mexico, Oaxaca. Found by great mycologist R. Gordon Wasson in 1958, is one of the best-known magic mushroom varieties producing sclerotia.

Let the experience with this truffle surprise you!

ALL OUR PRODUCTS ARE SOLD ONLY FOR GROWING. NOT FOR YOUR CONSUMPTION OR OTHER MISUSE.

Notify me when available
Rating
5

By buying this product you can collect up to 1 loyalty point. Your cart will total 1 point that can be converted into a voucher of 0,20 €.

Use of this original teonanacatl or ‘Flesh of the Gods’ was brutally suppressed by the Catholic Spaniards but survived clandestinely. It was not until the 1930s that their use was rediscovered by Western researchers.

Psilocibyn Mexicana was responsible for the first psychedelic trip made by Timothy Leary in 1960 about which he declared:  “In four hours I learned more about the mind, the brain, and its structure than I was able to in the 15 preceding years as a busy psychologist.”

All magic truffles contain the psychedelic psilocybin and psilocin, so the effects of all of them are quite similar. .

You will fell effects within 15 to 45 minutes after ingesting tuffles, depending on the dose and how full was your stomach before ingesting. Effects  last 4 to 6 hours and consists of a coming up period, an experience plateau, followed by a gradual descent back to sobriety. Effects include: bouts of hilarity, changed colour and sound perception, introspective thoughts, feelings of universal connectedness, waves of energy coursing through the body, vivid visions with eyes closed.

Psilocybin is non-toxic so it leaves no hangover. But you can see life differently the next day!

Truffles are sold fresh so must be kept in the refrigerator until you use them.

In Holland Magic truffels are free to eat. We do not advise it but if you swallow per mistake these magic truffles it´ll ensure you very intense experience. Consuming on an empty stomach is avoiding nausea and vomiting, which can occur in the onset phase. The effects will come on after about 15-40 minutes and last for up to 6 hours - depending on your tolerance, physical precondition and other factors. Consuming only 5 grams you might encounter slightly adulterated sightfor. A dosage of 10 grams is recommended for advanced users and 15 grams for top exerienced.

12 other products in the same category: