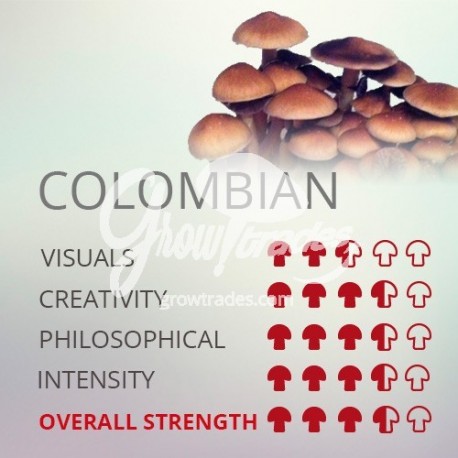 The Psilocybe cubensis 'Colombian' is wery popular for its strong effect, easy growing and abundant harvest. First found in Columbia. Is also known as a 'social mushroom' because it causes more social interaction for most people.This shroom won’t  dominate extreme visuals effects immediately, it´ll take you more to philosophical experience. Is considered as one of strongest shrooms. Despite its strong effect the Colombian is a great strain also for beginners. If you want to try powerful and philosophical experience, go for Columbian!

ALL OUR PRODUCTS ARE SOLD ONLY FOR GROWING. NOT FOR YOUR CONSUMPTION OR OTHER MISUSE.

Notify me when available

By buying this product you can collect up to 3 loyalty points. Your cart will total 3 points that can be converted into a voucher of 0,60 €.

Our Colombian GrowKits are ready to use. If you don´t wan´t to use them directly, keep them in the fridge (4ºC) up to 2 month. Follow correctly our growing instruction and you´ll harvest 700-800 grams of fresh mushrooms, spread over several flushes. It´ll take just 10 days till your first baby Shrooms appear. You need another 7 days to get plentiful harvest. Than, start your unforgettable experiences. If you like to feel marvellous creation power of nature, then this is your mushroom!

All GrowKits are 100% natural products, there is not added any kind of chemical or artifitial composition.

You just need a little water and patience and you'll get your own harvest!

Be the first to write your review !

14 other products in the same category: