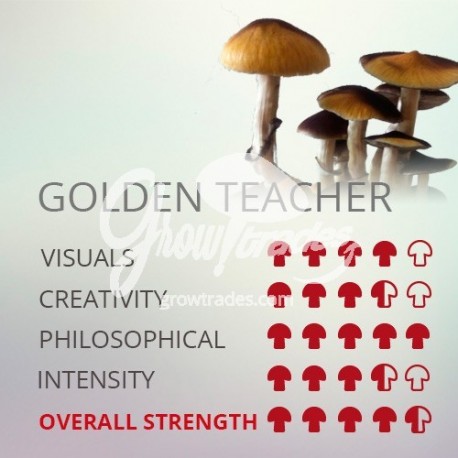 Psilocybe Cubensis Golden Teacher is the most magic mushroom thanks to its didactic effects and unknown origin. It  belong to a "new" shroom, it was discovered in the late 1980's.  It has been named by its golden caps and especial shamanic capabilities. Is wery popular for it´s easy and fast growing. Do not get surprise,  this is the only variety which has got the second flush much bigger than the first one.

this strain tends to a smaller first flush, the second flush is usually much bigger than the first.
Are you ready for a true  and deep shamanistic experience?
ALL OUR PRODUCTS ARE SOLD ONLY FOR GROWING. NOT FOR YOUR CONSUMPTION OR OTHER MISUSE.

Notify me when available

By buying this product you can collect up to 3 loyalty points. Your cart will total 3 points that can be converted into a voucher of 0,60 €.

Our Golden Teacher GrowKits are ready to use. If you don´t wan´t to use them directly, keep them in the fridge (4ºC) up to 2 month. Follow correctly our growing instruction and you´ll harvest 300-400 grams of fresh mushrooms, spread over several flushes. It´ll take just 10 days till your first baby Shrooms appear. You need another 7 days to get plentiful harvest. Than, start your unforgettable experiences. If you like to feel marvellous creation power of nature, then this is your mushroom!

All GrowKits are 100% natural products, there is not added any kind of chemical or artifitial composition.

You just need a little water and patience and you'll get your own harvest!

Be the first to write your review !

14 other products in the same category: